Sultans of the South 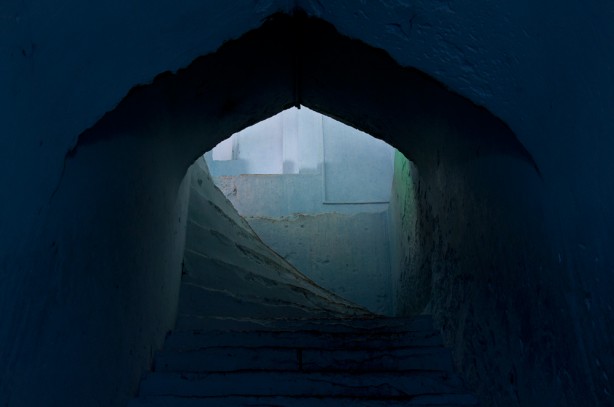 Unknown Bahmani tomb
14th century, near Ashtur, Bidar.
This stairwell leads down from the public mausoleum to the actual tomb below ground.

I recently had the opportunity to travel through the northern Karnataka towns of Bidar, Gulbarga and Bijapur. These were places I had been to before, but my travelling companions on this trip opened my eyes to their secrets. They were Dr Helen Philon, a leading Islamic art historian, and Klaus Rötzer, whose interests lie in the water technology and military architecture of medieval India. They revealed to me a treasure trove of Islamic design, bringing the history of these places alive through their passion and knowledge. Klaus would help me scale fort walls and moats to find hidden cannons and would re-enact ancient battles on the now quiet battlements, while Helen would ferret out secret passages and hidden doors to try and reimagine the royal courts in these empty forts, palaces and tombs.

With their help I discovered a rich vein of architectural heritage. We were working on a book on the 14th century Bahmani Sultanate and its successor states which, thanks to their wealth from rich agricultural lands and mineral resources, became great centres of art and architecture. They created a new architectural vocabulary that combined different stylistic influences, including from the Hindu kingdom of Vijayanagar. Despite their fractious relationship, Vijayanagar and the sultanates still shared artisans, craftsmen and architectural insights. Other influences came from the multi-ethnic society of the sultanates, which included Arabs, Turks, Persians and Africans, aside from the indigenous inhabitants.

Of the different peoples who migrated to these great sultanates, the ones that interested me the most were the Habshis, or East Africans, in particular the great Malik Ambar. He was sold as a slave by his poverty-stricken Ethiopian parents and found his way to the Deccan via a Baghdad slave market. He rose to become a great military tactician who confounded Akbar and Jahangir’s generals, and eventually became a powerful prime minister in the Ahmednagar Sultanate. He founded the city of Aurangabad and designed its ingenious canal water systems that still run to this day.

This trip was unexpected for me, as I found new histories and architectural gems in an area I thought I knew. Karnataka is packed full of hidden treasures which are sometimes difficult to find. That makes me value them even more. Shah Bazaar Mosque
Late 14th century, Gulbarga. Dr Philon describes this as a typical Deccani congregational mosque. The royal family would enter from a hidden door on its northern side. Underground palace chambers
15th century, Bidar Fort
Probably zenana enclosures where the royal women would enjoy the subterranean cool during the long hot summers. These rooms are an exact copy of the palace above. As the palace is situated on a cliff, they have the same views of the gardens and lakes below. Panchakki
17th century, Aurangabad. Built by Malik Ambar, the source of this water was many kilometres away. The water still flows even today. These complex water features would create the illusion of mist or rain, which must have felt almost miraculous in this dry region. 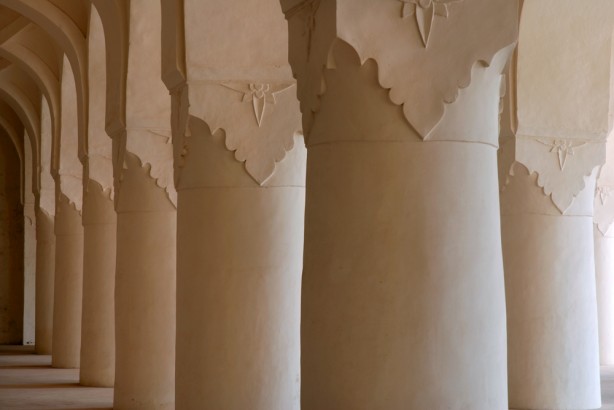 Royal Bazaar
Early 15th century, Gulbarga Fort. One of the best preserved bazaars in the Deccan, it has incredibly well-kept small square rooms with pyramid vault roofs and overhanging stone chhajjas that line both sides of a long street. Some are now inhabited by artisans making large beaten copper pots. I couldn’t help thinking perhaps this was the same sound inhabitants heard all those centuries ago.

Clare Arni is a photographer based in Bangalore. Her work encompasses architecture, social documentary and cultural heritage. She has been published by Phaidon, Thames and Hudson, and Dorling Kindersley. She has contributed work to Abitare (Italy) Tatler, Condé Nast (UK), The Wall Street Journal and Harvard Design Magazine. Clare’s solo photographic books document the history of Indian architecture. Her work has been exhibited across many countries.