Raghu Rai’s lost cache of rare images of Bangladesh’s 1971 war brings back the poignancy of the tragedy.

It was the first and only war that Raghu Rai covered. Yet, when the Indian government asked him for photographs of the liberation of Bangladesh in 1971 and the plight of millions of refugees who streamed into India, he said that he had nothing of any consequence. The Magnum photographer believed that he only had a few images. Nothing significant or exhibition-worthy, he imagined.

Some months later Rai’s assistant brought him a little bundle that he had found while sorting out the archives in his studio in New Delhi. It had been there all the while, forgotten amidst Rai’s paraphernalia for over four decades. Inside, neatly packed and labelled and defiant in the face of the creeping corrosion of dust and time, were scores of his images of the devastating war that had resulted in the liberation of East Pakistan. The images of the suffering of the refugees who fled to India and took shelter in West Bengal, Tripura and Assam are particularly poignant.

Seen today, these resurrected images evoke the tragedy of this war, one which has been all but forgotten. Rai is not a war photographer; he was working for The Statesman at the time. But he was able to capture both the triumph of the oppressed and the humiliation of the oppressors. Photographs of General Amir Abdullah Khan Niazi, the Commander of the defeated Pakistani troops, signing the Instrument of Surrender as the late Lt. General J.S. Aurora looks on, inundated the press at the time. Yet, few were able to capture the understated despondency of the Pakistani general whose soldiers had been captured en masse.

The photographs of the jubilant Mukhti Bahini soldiers who fought for the liberation of East Pakistan are interesting because they appear relaxed, off their guard as it were and, in a few images, even unaware of the camera.

However, Rai has memorably captured the anguish of the refugees, both their danger-fraught exodus and the desolation of their lives in an alien land. Remarkable about this body of the photographer’s work is his ability to capture the universal in the particular. The image of a young boy, his eyes welling up with tears, conveys the tragedy of war and of human suffering. In those enormous eyes in an emaciated face you can read fear, agony, pain or sheer misery. It could have been a child in a similar circumstance, anywhere and in any century. Rai has portrayed the tragedy of the eternal refugee. 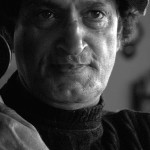 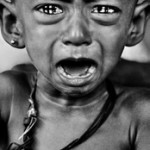 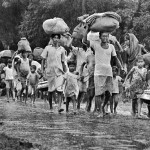 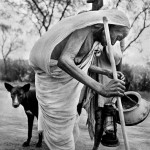 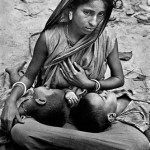 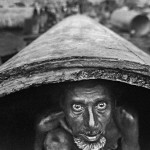 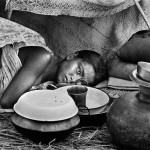 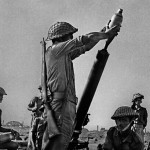 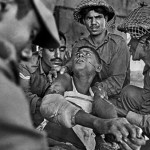 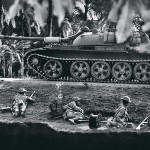 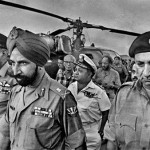 The Surrender: General Amir Abdullah Khan Niazi, the Commander of the vanquished Pakistani troops
and the late Lt. General J.S. Aurora, Commander of the India-Bangladesh joint forces in the 1971
liberation war