Finding F Selvaraj’s house was no simple task. First, there is the suburb of Nanganallur to negotiate. Situated southeast of National Highway 48, and across the road from Chennai airport’s runway, Nanganallur is a congested urban village. More specifically, a Brahmin enclave within a village. Narrow streets crisscross it, traffic pouring in from every direction. Small provision stores, homes built on tiny plots of land, multi-storey flats nearly toppling on to the road… colonies within colonies within colonies. Nestled amidst these uncertainties are innumerable temples.

I’ve always thought of Nanganallur as a poor man’s Mylapore, that clichéd symbol of Brahminism. Through the 1970s, 1980s and 1990s, Nanganallur had become home to Brahmins from lower-income groups and for government employees who could not afford, or were unable to find a place in, the larger Mylapore area, or the even more exclusive Alwarpet—an ungated yet walled locality. In Chennai, upper-caste habitations have continued to follow a century-old model. The socially privileged have almost always moved towards the south or southwest, and Nanganallur was one more wave of south-bound movement.

During the British Raj, the ‘town’ was the centre of all business activity in Madras; it was the heart of the city. The pin code 600001 is still assigned to the area. The city’s administration (then and now) is not too far away, and the stunning Indo-Saracenic-style buildings of the High Court are close by. Places north of town were un-desirable. Loaders, coolies and labourers belonging to the lower castes lived there.

Upper castes who were in business or law situated themselves in town, while the middle-class Brahmin neighbourhoods were south, built around two iconic temples in Triplicane and Mylapore. After establishing themselves in suburbs such as Vepery, Kilpauk, Chetpet and Egmore that were west of ‘town’, the English elite moved southward towards the Adyar river. This demographic movement continued even after Independence. The upper-caste rich, including those who lived in town, took over the British elite locations. The workers occupying places north of town became even more marginalised, while those who needed to work in the homes of upper castes, or provided them services, took to the backstreets all over the city. Therefore, new habitation for caste elites took the south or southwestern trail. 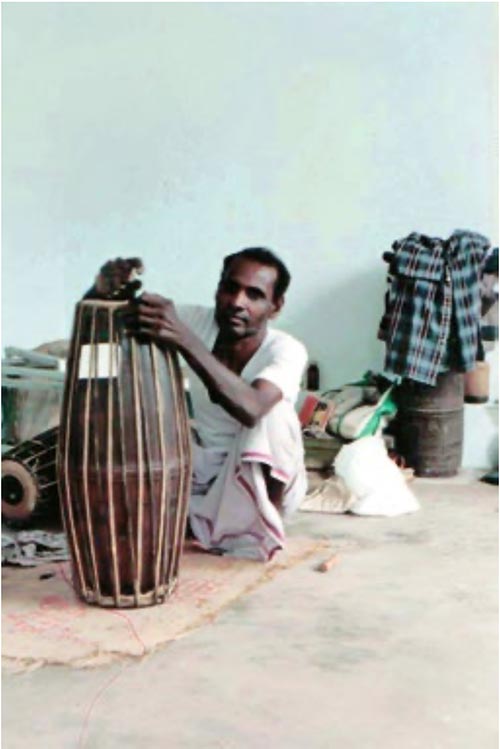 I have performed often at Nanganallur’s revered Anjaneyar temple, the more modest Lakshmi Hayavadana Perumal temple and for various sabhas, such as Krishna Fine Arts or the older NSTSS (the unwieldy acronym by which Nanganallur Sri Thyagaraja Sangeetha Samajam is known). Several visits later, I still struggled with directions to these venues, often reaching just in the nick of time, sometimes a few minutes late. Google Maps, that urban saviour, made things easier, but it had yet to master the labyrinth that is Nanganallur’s agraharam (a Brahmin enclave usually centred around a temple). Then there was that notorious railway crossing that arbitrarily regulated vehicular entry. Now, of course, underpasses and flyovers—Chennai’s favourite and perpetual preoccupation—have eased travel to the area.

For all this talk of inaccessibility and distance, Nanganallur is only 13 kilometres from my home in Alwarpet, a mere forty- five-minute drive away, even accounting for Chennai traffic.

Selvaraj had moved to Nanganallur, and I had been planning this meeting for a while. Travelling with me was a colleague who had initiated me into the nuances of the mrdangam and its making. For over six months, he had been sending me literature and tutoring me on the instrument and its history.

The mrdangam is a cylindrical two-faced drum, the primary percussion instrument used in Karnatik music performances and Bharatanatyam recitals. Its body is a hollow resonating chamber fashioned from the wood of a jackfruit tree. The frame is curved, and narrows towards the ends. On the dominant side of the frame (which faces the audience) are three layers of hide, intricately braided together. The top layer of cow skin is cut out as an annular circle that leaves bare the goat skin right below, in the centre of this drum face. Below these two playing layers is a much narrower supportive circular strip of cow skin. On the exposed goat skin (second layer), a black or dark reddish paste—made from a mixture of boiled rice and a specific kind of powdered stone—is applied. Between the two upper membranes, tiny strips of sticks cut from a variety of grass (usually used to make brooms) or small granules from the stone mentioned earlier are placed to provide resonance and tonality.

On the other side of the frame are also three layers of skin: two from buffalo and one from goat. The two layers of buffalo skin are cut out together and form one thick annular strip, but on this side, much more of the goat skin below is exposed in the centre, providing a larger indented playing surface. The two buffalo skins are braided together, while the goat skin below is simply tied to them with small knots on the inner side. Traditionally, the leather membranes on either side are tied and tightened together with ropes made of buffalo skin. All of this, of course, barely begins to describe either the process of making a mrdangam, or the complexity of the instrument itself—both of which we will explore further.

My curiosity about the mrdangam began when I realised that we rarely, almost never, speak about these master makers. My book, A Southern Music: The Karnatik Story, explored caste discrimination in, what I hoped was, some depth, but I had entirely excluded instrument makers from the discourse. And amongst makers, those who deal with skin have always remained at the very edge—a fact I was well aware of. But when I wrote about caste and its implications within Karnatik society, I failed them.

As a practitioner of vocal music, I have met some of them over the years and have heard the folklore about their abilities. But they were not an integral constituent of Karnatik music’s history or mythology. We knew very little about the people, their lives, struggles or, indeed, their creativity and craftsmanship. Little did I realise then that this was going to be a far more complex and messy investigation than I had envisaged. 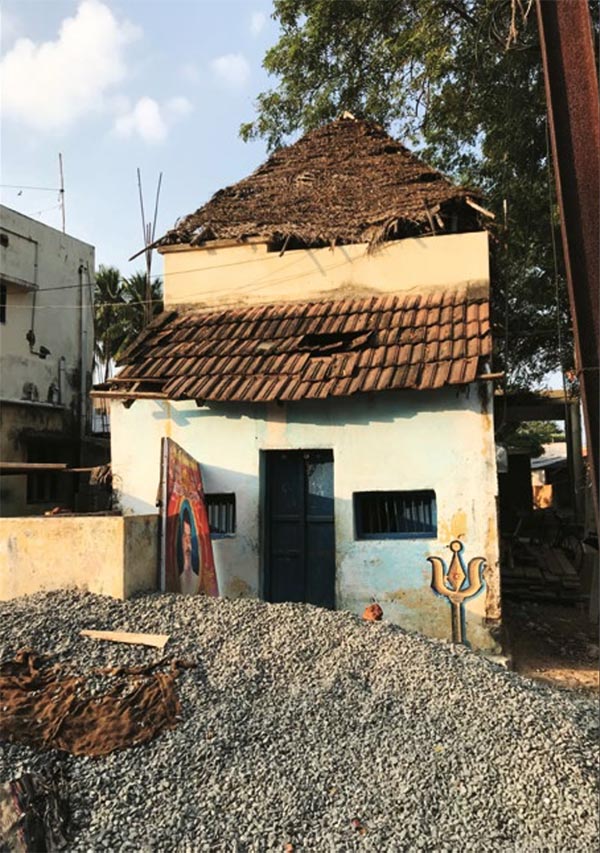 This is why I set out in search of Selvaraj, at any rate. Selvam, as he is known, was a third-generation mrdangam-maker, the oldest living member of a renowned Thanjavur family. He was the stalwart who gave maestros such as Palghat Mani Iyer the flawless medium through which they could express their rhythmic mastery. As we turned left just past a market, a turning I had often missed before, I noticed a man hailing us. He was wearing a veshti and dhoti, an orange shirt and a shawl draped around his neck and down a shoulder. Selvaraj was waiting for us on the main street to ensure we did not lose our way. He instructed me to park the car right there and walk with him. My first impression was of a frail, old man. But his steady stride and authoritative tone forced me to quickly reverse my judgement. As we followed him, I remembered that Selvaraj was missing an arm, and that he had lost it in a freak accident. F Melgies, his brother, described the incident when we met later. “He was coming back from Mayavaram after finishing some mrdangam work. You see, on the highway, there weren’t any dividers. If two buses go side by side, they are really close. He was sitting with his hand out of the window and the bus hit it. It was a government bus. He got money from the government as compensation.” Selvaraj had lost his right hand, his working hand, the hand that made him who he was. Perhaps the white shawl covered both his physical and emotional scars.

A few lanes down, we arrived at his home, a compact structure with a couple of small rooms. The walls were pink, the paint coming off here and there—a wornout square den that put me in mind of old village tenements. He had laid out two mats for us to sit. On the wall behind him was a poster of Mother Teresa and, in another corner, the wooden shell of a mrdangam.

As I write about Selvaraj, I imagine his sharp eyes, mischievous smile and his casual but knowing confidence. A confidence backed by generations of knowledge, strengthened by the waters of the Kaveri. That Kaveri metaphor came to mind unbidden. It is often used by Brahmins from Thanjavur who believe that Karnatik music is in their very being because they grew up drinking the waters of that sacred river—the water that nourished this musical land.

Ruled by the Cholas, the Nayakas and the Marathas at various periods, prosperous Thanjavur has long been considered Tamil Nadu’s cultural nerve centre. Why, though? Madurai, Tirunelveli or Ramanathapuram are no less ‘cultural’. For me, this association comes from the many stories I heard as a child of Karnatik musicians who lived in and around Thanjavur.

The notion that this area is extra special is not one I even questioned for most of my life. Certain parts of Tamil Nadu do not find prominent mention in the state’s cultural annals—say Kongu Nadu, comprising the state’s northwestern districts. I have no doubt that this is because Thanjavur culture’s upper-caste and class associations sit comfortably with what the dominant sections of society have deemed to be ‘culture’—or ‘high culture’ anyway. Even during the colonial era, the district was controlled by powerful Brahmins and other upper-caste, land-owning communities, giving the art forms associated with it social gravitas.

According to FR Hemingway’s Madras District Gazetteers, published in 1906, “Brahmins are proportionately more numerous in Tanjore than any other district except Ganjam and South Canera, where the members of this caste are less orthodox than usual. They number no less than one in every fifteen of the inhabitants, and consequently Brahmin influence is predominant in social and religious matters.” He goes on to write, “Vedic sacrifices are performed on the banks of its streams; Vedic chanting is performed in a manner rarely rivalled; philosophical treatises are published in Sanskrit verse; and religious associations exist, the privilege of initiation into which is eagerly sought for and the rules of which are earnestly followed even to the extent of relinquishing the world.”

Is it surprising then that this area was once the beating heart of Karnatik music?

An extract from Krishna’s forthcoming book Sebastian and Sons: A Brief History of Mrdangam Makers, Context / Westland, published in the Jan-Mar 2020 issue.

TM Krishna is a vocalist in the Karnatik tradition. His book A Southern Music (HarperCollins, 2013) was awarded a 2014 Tata Literature Award. In 2016, Krishna received the Ramon Magsaysay Award in recognition of “his forceful commitment as artist and advocate to art’s power to heal India’s deep social divisions”. His forthcoming book Sebastian and Sons traces the history of the mrdangam-maker and the mrdangam over the past 100 years.