When I moved to South Africa six years ago, inequality was impossible to ignore. From the minute you land in Cape Town, you are surrounded by shacks. Tin shacks surround the airport, which you have to drive past for about 10 minutes, until you reach the more affluent suburbs where privileged people live. Most people try never to return (till they next have to go to the airport).

To paraphrase Barack Obama, inequality is the defining challenge of this generation. It’s not confined to one region of the world. It’s not confined to one group of people, or one nation; it is intersectional, it is international. But it struck me as strange how easy it was to become habituated to inequality. To drive past these shacks every day, but not really think about them, or to ignore a problem which seems so intractable.

One day in April 2016, I had a “light bulb” moment, when I decided to take a drone over one area of Cape Town I knew to be very unequal. The Unequal Scenes project was born—a visual exploration of inequality around the world by drone.

The power to shift someone’s perspective allows you to do two critical things. First, display a social justice issue in a new way, which may get people talking or thinking about that issue in a new way. But also, in today’s media-heavy environment, you need images that stand out on someone’s news feed. Capturing these images with a drone
certainly does that.

The drone provides a separation from subject that can be powerful when dealing with an emotionally charged issue like inequality. The height and distance allow the viewer to see inequality almost as if it were a structural problem—the drone photos become patterns, colours and shapes, rather than individuals. This, I think, allows the viewer to engage a different part of their brain, perhaps a less judgmental part. I call this “objectivity”, as if one were looking at a map, or an atlas. Of course, that’s false: my photos are completely subjective, as I choose the frame and location in which I shoot. But it may still be “more objective” than photography on the ground. 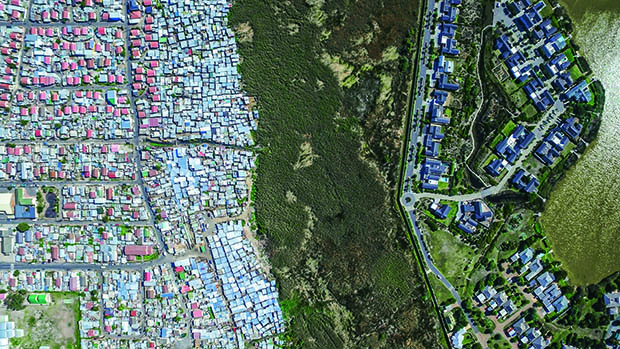 The Unequal Scenes project has been internationally recognised and awarded. Miller has also founded a non-profit, africanDRONE.org, to help promote drone journalism and empower African storytellers who are looking to use drones in their methodology.

This photo essay was published in the April-June 2018 issue of The Indian Quarterly magazine. The theme of the issue was “Black and White”.

Johnny Miller is a photographer, journalist and drone pilot specialising in urban, cultural and social justice projects. He is based in Cape Town.