Room No. 32 in Guru nanak Niwas, opposite the Golden Temple in Amritsar, was rather busy on April 13, 1981. It was Baisakhi, an important day in the history of Punjab, and Balbir Singh Sandhu, secretary general of the “Republic of Khalistan”, was issuing mint-fresh, deep navy-blue and saffron Khalistan passports. Even I got a shiny new one with lots of blank pages for visas. Some rather stale celebratory barfi was being passed around in the crowded room. Curious about how serious all this talk about carving a new nation for Sikhs really was, photographer Sondeep Shanker and I had gone to Amritsar the previous day. We were working for New Delhi, a fortnightly magazine  started by MJ Akbar and edited for a year by Khushwant Singh. A few hundred miles away in the capital, the fledgling clamour for a separate Sikh nation was not considered newsworthy. For the national press, it was nothing more than local politics fuelled by diasporic Sikhs. But that morning in the slightly grimy room, which Mr Sandhu had made his home, I sensed that it wasn’t quite that simple: there was something else going on. The anger being expressed seemed real. There was a young man with finely chiselled features and an intricately-layered dark blue turban sitting quietly. Soft-spoken at first, he suddenly started talking about Santji, a religious leader. The zeal with which he spoke about him made me blurt out “Take me to your leader”, like a line from a B-grade Hollywood movie.

He did. The next day we left for Mehta Chowk, about an hour’s drive from Amritsar. Sondeep and I had presumed it would be a modest house in a bucolic setting. We couldn’t have been more wrong. Our taxi stopped before an imposing two-storied building. It was the headquarters of the fundamentalist DamdamiTaksalBhindranwale sect. Inside, what took our breath away was the sight of smooth-cheeked young boys, some with their milk teeth still intact, holding guns to their shoulders, ready for battle. There were even children—boys who could not have been more than four years old—carrying kirpans and spears. Apparently, they also played with the guns. Starting Young: A child holds a carbine belonging to his father

Santji was waiting for us. He was, as we soon learned, Jarnail Singh, then 33, and the leader of the Bhindranwale sect. The man with the sensitive face who had taken us to his leader was Amrik Singh, president of the All India Sikh Students’ Federation at the time, and the son of the former head of the Bhindranwale sect. Both men were to die in Operation Blue Star when the Indian army went into the Golden Temple in June 1984.

I had never heard of Jarnail Singh. There had hardly been any mention of him in the national press. Nor did he appear imposing. He barely looked us in the eye; there was something awkward in his demeanour. Rather scrawny, there was an air of diffidence about him. He wore a knee-length white kurta with a white cloth draped over his shoulders and carried a spear. Jarnail Singh’s battle at the time was with the Nirankaris, a reformist movement in Sikhism. Some of his men had been killed in a clash with them three years earlier on Baisakhi.

The interview takes place on the terrace on that star-filled night. When I ask about Khalistan, he talks in riddles, peppering his replies with similes and occasional
humorous asides.

Excerpts from the interview:

Will there be a Khalistan?

Chiriyaangumhrahiyanhain. Unanughosleychaideyhaigey.(Birds are wandering. They need their nests.) Sikhs should have a home. If some of us accept the life of subordinates, of slaves, and even then we are not allowed to exist, something has to be done. We have to break the shackles and be free.

Will there be violence?

Baadalhaigey, kaaleyhaigey, ghaneyhaigay—garjangey.(There are clouds. They are black and thick. There could be thunder… If I say anything about Khalistan, I am committed; I can’t go back on my word. I believe in the Guru GranthSahib. . . So I say that if you see clouds, there is a likelihood of rain, but sometimes there are lots of clouds and no rain. And sometimes, hail falls from the clouds and destroys the crop. . . We are not free to worship. The government is helping our enemies. It helps the Nirankaris and gives them police protection. I don’t ask for police protection. We have the right to defend ourselves.

Do you think that children should carry guns?

The tenth guru said that every Sikh must have arms. He must know how to use them.

Will you give me a visa?

Yes, you can come as an ambassador from India. The sky had darkened by then. We moved downstairs to have dinner. Bhindranwale’s headquarters was like a monastery. It was spartan and there were only men and boys silently roaming about. We sat on the floor and ate chickpeas and chapattis liberally slathered with ghee (clarified butter), washed down by tall glasses of warm milk. Jarnail Singh was cordial but there was a soup çon of menace in his voice—especially when he spoke about the Nirankaris and Jalandhar-based Lala Jagat Narain, a veteran journalist and proprietor of the widely-circulated dailies Hind Samachar and Punjab Kesari. He had campaigned vigorously against Punjabi being adopted as a medium of instruction in Hindi schools. Lala Jagat Narain had also urged the Hindus of Punjab to reply to the government census that Hindi, and not Punjabi, was their mother tongue.

Jarnail Singh’s diatribe against the veteran journalist prompted us to drive to Jalandhar the next day to warn him. Lala  Jagat Narain was assassinated that September. Jarnail Singh was arrested but released from jail after nearly a month: there wasn’t enough evidence to convict him. Sondeep and I went back to Amritsar to meet him. Follow the Leader: Jarnail Singh Bhinderanwale with an audience atop the Guru Nanak Niwas in the Golden Temple Complex, Amritsar

Jarnail Singh returned from jail a different man. He was feted like a hero in the Golden Temple. There were huge crowds hanging on to his every word. When I started taking notes during his speech, some of the women sitting next to me looked at me suspiciously. One of them even asked me if I was a government agent. Seeing me being threatened, Jarnail Singh and Amrik Singh told me to join them on the podium.

Jarnail Singh was now spending more time in the temple complex. I met him later that day for an interview at Guru Nanak Niwas. He was still scrawny but now looked me straight in the eye. There were rumours at the time that the Congress (I) Party had propped him up to divide the Akalis. The jail sojourn was probably a turning point in the trajectory of this activist-preacher: he seemed angrier, but more confident.

“Bibi, tuhimennu Khomeini akhyasi(Ma’am, you are the one who called me Khomeini), was the first thing he said to me. In an article on the Khalistan movement in New Delhi, I had written: “Khalistan has its potential Ayatollah Khomeini: SantJarnail Singh” (published April 27–May 10, 1981). He seemed very pleased with the comparison. However, this time the niceties were missing. He had a mission which went beyond the Nirankaris. The last trip Sondeep and I made to Punjab was to Rode in Faridkot district. It is the ancestral village of Jarnail Singh. We wanted to meet his family. The drive from Ludhiana to Rode was revealing, especially regarding the generosity and entrepreneurial flair of the Punjabis. Passersby were being offered lassi outside a home. Intrigued, we went into the house. Apparently, their cows were producing so much milk that they were churning tons of lassi in their washing machine! They had a separate one, the lady of the house assured us, for washing clothes.

The journey was uneventful, almost pastoral, until we approached Rode. We stopped to ask for directions to Jarnail Singh’s ancestral home. The man was old and bent-over, one of his eyes clouded with cataract. He glared at us, pointed ahead and said: “Ikgoli di maar. . .” (The distance a bullet travels…) Violence was just a blink away. Terror in the time of lassi. 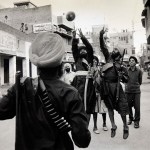 A group of armed militants play volleyball, blocking a road in the walled city of Amritsar 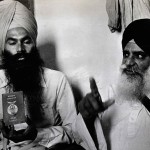 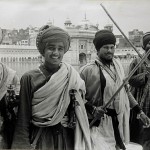 A group of Sikhs in the Golden Temple complex 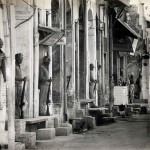